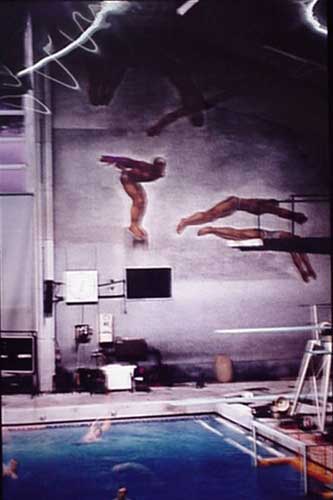 The Pool at The Stadio dei Marmi

This work was first exhibited on The Sasol New Signatues exhibition at the KKNK in Oudtshoorn. It was curated by Clive van den Berg. The images were originally captured in 1999 whilst I was in a research residency at The Dutch Institute in Rome. I was intrigued by the fascist architectural projects of Mussolini. The Stadio dei Marmi being a prime example. By taking these ‘faulty, blurry’ photographs the image tends to ‘unhinge’ Suddenly the mosaic divers on the back wall seem animated, ready to join the very real polo players in the pool. If anything the picture has a subtle sexual romance to it. This in total contrast to its initial intent to parade a fascist bravado.” – Luan Nel