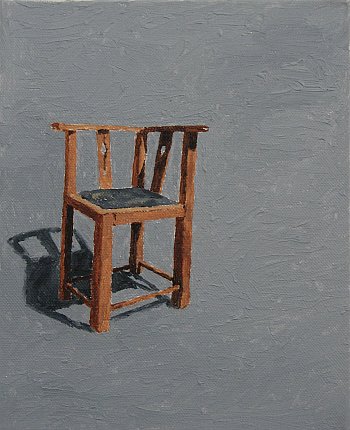 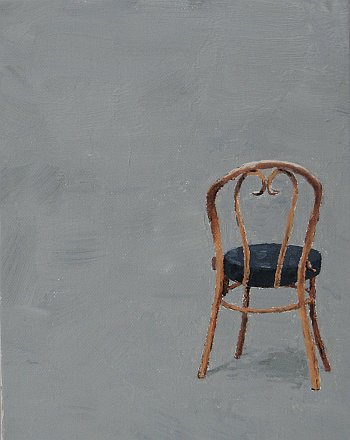 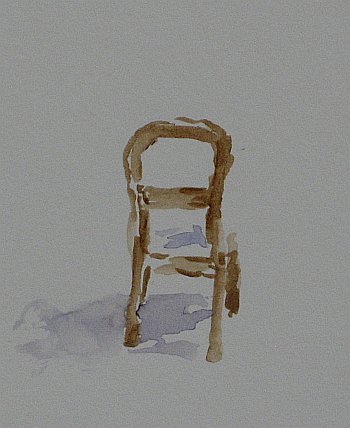 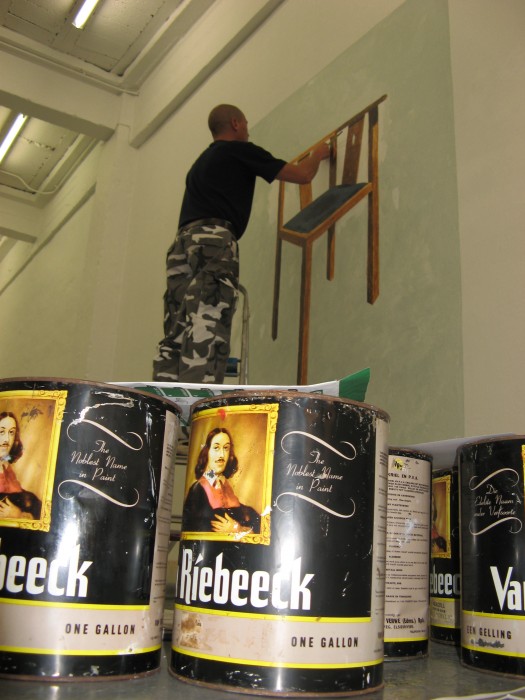 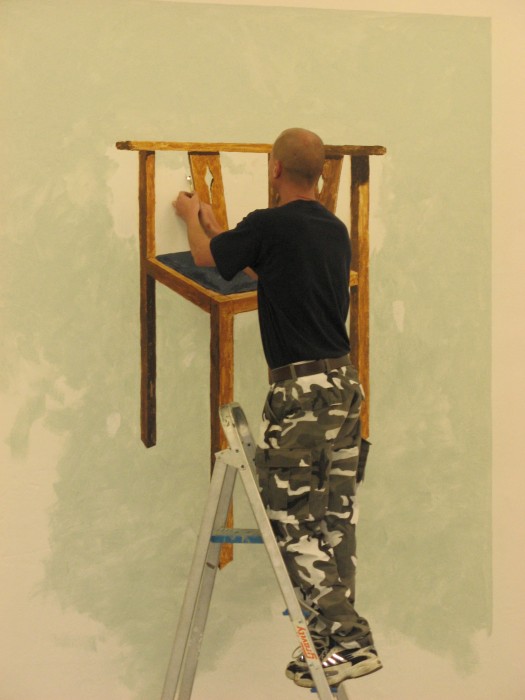 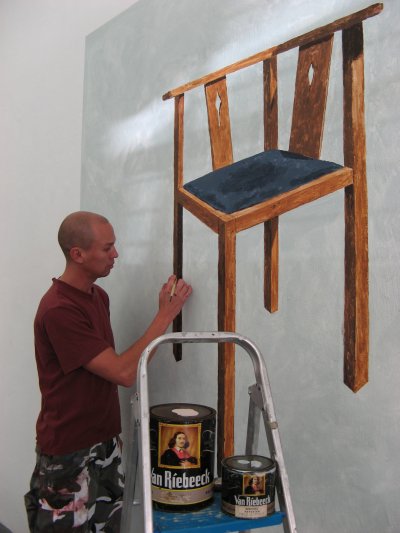 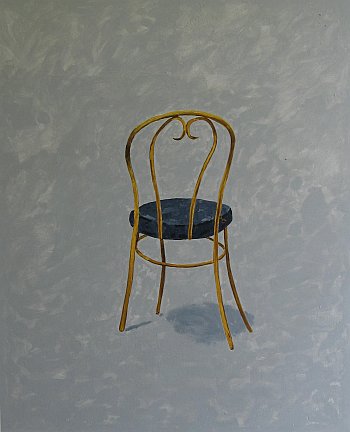 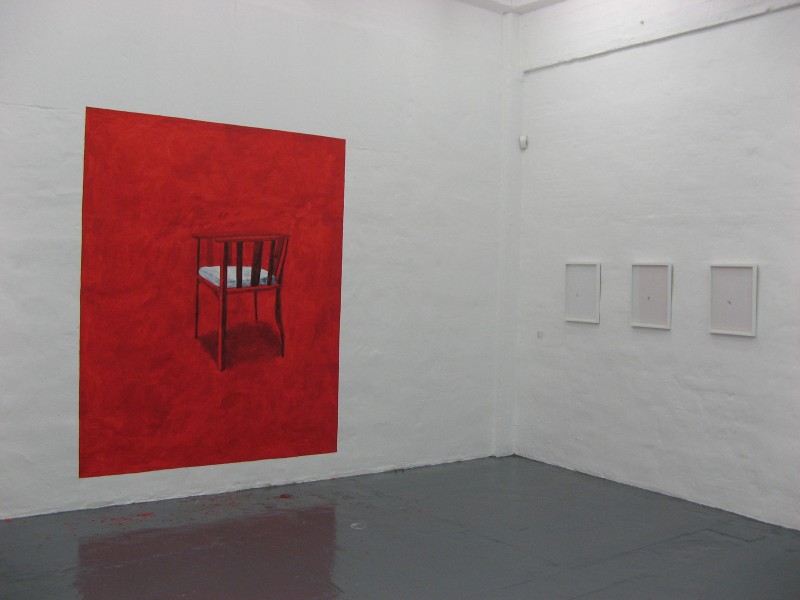 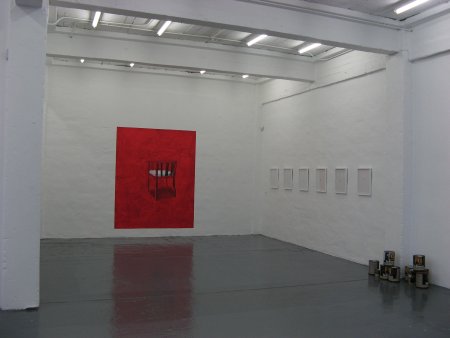 The genesis of Luan Nel’s latest exhibition at Art on Paper Gallery is a couple of one gallon tins of wall paint dating from the 1950s that he chanced upon in one of the many second hand furniture shops that dot the long Street, “Blikkiesdorp”, or Albertville in Johannesburg. The faded label, with its Van Riebeeck trademark, not only prominently displays the well-known portrait of the 17th century Dutch colonist found in virtually every History school textbook, but also proudly declares Van Riebeeck paint as the “noblest paint of them all”. For Nel this was more than a serendipitous found object: he tested the paint and was delighted to discover that the high lead content preserved the paint inside the tins. He decided that the paint was not ‘found object’ per se, but rather ‘found medium’. With this new/old medium he executed three murals at Art on Paper Gallery: wall paint eminently suitable for the artist’s site specific artwork!

A name such as ‘Van Riebeeck wall paint’ can hardly be called a coincidence in the early 1950s, the time of the country-wide tri-centenary celebrations of the colonization of a private enterprise (the Dutch East India Company) by its emissary, Jan van Riebeeck. Van Riebeeck paint was a prosaic, albeit banal, spin-off of a mid-twentieth century reinvention of a South African colonial past. The reaffirmation of this past was even more controversial in the early 1930s with Jan Juta’s mural of Jan van Riebeeck in South Africa House, Trafalgar Square, London. The original central panel showed Van Riebeeck having landed, with his ships off the coast, and a group of his followers kneeling under a large cross, which dominates the painting. Afrikaner nationalists objected to what was perceived as a representation that encouraged a view of Van Riebeeck as a Catholic. After much resistance from Charles te Water, the High Commissioner, the mural was duly replaced with a less contentious rendition of the Dutch landing.

What was generally overlooked during this debacle was the wooden furniture in the ‘voorkamer’ of South Africa House, notably an excellent collection of 17th and 18th century Cape chairs. Not surprisingly, the chair became the central motif in Luan Nel’s new body of work. His chairs, however, are empty, de-contextualized, depicting only a minimal sense of front, back and side elevations of the chairs. Nel harnesses his usual interest in proportion – minute miniature water colours and oil paintings of chairs, to life size depictions of these chairs in the murals – to great effect.

He is also no stranger to the exploration of the mural in his art. Nel used the mosaic murals at the Forno Italico, Rome, originally known as the Forno Mussolini, the giant sports complex of the 1930s, conceived as a temple to the Fascist cult of athleticism, portraying virile sportsmen in various stages of undress, in two light box works entitled, The Pool at the Studio Dei Marmi (1999/2000). In the same manner in which these light boxes invoke an oppressive past permanently inscribed on the wall, the new work on this exhibition comment on an iniquitous local past. Nel strips history of all external trappings and shows us an empty chair in its place. The title of this exhibition, Silent Exit, captures a shameful retreat if not a form of penitence. What is left is an empty seat: a seat perhaps to be occupied by a new leader.

The Cape chair Nel depicts on this exhibition has even more metaphorical connotations than that of a seat of power. It symbolizes a form of cultural hybridity as well. The 17th century Dutch chair has undergone many subtle changes in the ensuing three centuries on South African soil. So had the people in the country. The chair is an apt metaphor for hybridity – mutual changes that take place inadvertently when different cultures come into contact or clash with one another. New hybrid forms include such chairs as the cot or corner chair, the ‘burgomeester’ or wheel chair, and the ‘Tulbagh’ chair. (Atmore, 1974. Cape Furniture). Woodhouse laments in his book, The Interior of the Cape House (1982) that “it is a great pity that we have nothing but a very inadequate inventory of descriptions to guide us”. Nel provides an alternative inventory on this exhibition.